As cat owners, we’re used to witnessing all sorts of weird behavior from our furry buddies. From scratching furniture to kneading against soft pillows, there are many things that cats do that make us curious.

Sure, most of these actions are harmless, but others may be a reflection of a problem that your kitty might be facing. If you’ve ever wondered, ‘Why does my cat eat cardboard?’, then you should be prepared for many possibilities.

For instance, it might be because your cat is teething, anxious, or even bored. So, how can you tell what caused this behavior, and is it easy to get rid of?

In this article, we’ll answer all these questions. Now, let’s dive in!

Cat Attitudes is reader-supported. When you buy through links on our site, we may earn an affiliate commission.

5 Reasons Why Your Cat Is Eating Cardboard

Once your cat starts eating random items like cardboard or paper, you’ll begin to suspect there’s something wrong. And, in order to solve this problem, you’ll need to identify the cause first.

Therefore, it’s time that you take a look at the following scenarios to see where your cat fits in. Sure, there aren’t any scientific studies that prove anything yet, but some theories might explain this behavior.

Much like human babies, little kittens have baby teeth that they soon shed for adult teeth. Teething begins in kittens at approximately ten weeks to six months of age. During this period, the primary incisors get replaced by their permanent siblings.

Thus, by the time that a cat reaches six to seven months of age, all of its adult teeth will have erupted.

During the teething process, your cat’s gums might become irritated and itchy. So, it’s only natural for him to seek relief from this annoying pain by chewing or eating cardboard. Plus, since cardboard has a give to it, this material can feel good to chew against.

The bottom line is, if your cat is younger than six months of age and shredding cardboard, chances are he’s just teething. That doesn’t mean that it’s okay, though, since actually swallowing cardboard isn’t healthy.

If your cat chews on cardboard while it’s past the age of six to seven months, things might not be so simple. This behavior could mean that there’s a medical problem that your cat may be suffering from.

For example, your cat’s diet might be insufficient or missing some important nutrients. This could lead to your little friend’s attempts to make up for these nutrients by feeding on cardboard.

If you think this is the case, you should make sure that you’re feeding your cat properly according to his age and weight. The vet should be able to help you with this.

Sometimes, the reason behind this strange behavior could be more complex. See, cats with thyroid issues tend to nibble on non-food objects, too.

Another potential cause is pica, which isn’t very common in cats. However, it’s still a possibility. A cat that has pica will chew on completely random items. It could be a cardboard box, fabric, yarn, electrical cords, or even your phone.

To get an accurate diagnosis, you must pay your vet a visit. This way, you’ll know if there are any underlying health issues that you should treat. Not only will that stop your cat from chewing on unlikely things, but it might also prevent further complications.

Here’s another theory that might explain why your cat is shredding paper or cardboard. Some people believe that it’s a predatory instinct that goes back to the cat’s larger siblings.

In nature, wild cats rip into their recently-hunted prey, tearing down meat to bite-size pieces to make eating and digesting easier. So, there might be a remainder of that hunter’s behavior inside your little furry friend.

Much like sneaking on silent paws or chasing moving objects, cats tend to channel these centuries-old instincts every now and then.

To help your cat connect with its natural urges, you could buy her a cat toy instead. Sure, she won’t be able to shred it like she would a cardboard box, but the toy should keep messes to the minimum.

A Way to Stake a Claim

Cats are territorial creatures, and they’ll often leave their scents on objects or even humans to mark them as their possessions. So, it’s only normal to assume that they’d do the same with cardboard or paper.

By biting or chewing on cardboard, your cat could simply be telling you that it’s hers. There’s nothing wrong with that, of course, unless your kitty shows so much aggression toward its belongings.

To keep this from happening, you must make sure that your little kitty gets enough physical and mental stimulation every day. Otherwise, she will release the suppressed energy in other ways you may not like.

Besides boredom, anxiety could be another reason why your cat is eating cardboard or paper. See, when a cat is stressed about something, she tends to do strange things to relieve this pressure.

If you think this is the case, try to understand what’s causing this stress, then prevent it. Here are a few things that could cause cats anxiety.

How Common Is Cardboard-Eating Amongst Cats?

If you’re merely talking about chewing on cardboard or paper, you must know that this behavior is very common in cats. It’s normal for the majority of cats to do it for a variety of reasons, but the most recurring reason is that it’s a fun activity.

On the other hand, eating cardboard might not be so common, and it may be a sign of deeper issues that you’ll need to figure out. In this case, a cat might be suffering from pica, anxiety, depression, or she might not have enough food.

It’s important that you note the difference between these two scenarios to ensure that your cat doesn’t have any underlying health risks.

Why Is Eating Cardboard Unsafe for a Cat?

Swallowing cardboard could be risky for a cat on so many levels.

For starters, large chunks of cardboard can get stuck in a cat’s throat, causing suffocation. Also, if a cat manages to swallow it, pieces of cardboard could cause countless digestive system issues.

Let’s not forget how cardboard boxes usually have printed ink on them, which may include toxic substances. Sometimes, these boxes are treated with chemicals to store and transport products efficiently.

The bottom line is that cardboard isn’t safe for cats to swallow or digest. And, if it includes chemicals or ink, a cardboard box may not be suitable for a cat to play with either.

How Can I Stop My Cat From Eating Cardboard?

The first step to solving this problem is to know the reason behind this behavior. So, if it’s a medical issue, you’ll have to visit the vet and begin treatment.

If it’s merely related to hunting instincts, being playful, or enjoying the texture of cardboard, then there’s nothing to worry about.

On the other hand, if your cat eats cardboard or paper because he’s anxious, you’ll have to find ways to comfort him. Here are a few tips on how to soothe a cat with anxiety.

Ultimately, you could always keep your cardboard boxes out of reach. Simply enough, stash them away somewhere your cat doesn’t have access to, such as the garage or the attic.

Another good option is to deter this behavior by lightly spraying your cat with water every time he or she does it. Because most cats don’t like to get wet, yours will soon start to think twice before repeating the action that you don’t like.

Plus, you may want to invest in a spray that’s specially made for cats and dogs to make objects taste bitter. Once you use it on a cardboard box, it’ll taste bad enough for your cat to leave it alone.

Is It Okay for My Cat to Only Chew on a Cardboard Box?

In most cases, yes. Chewing on a cardboard box can be enjoyable for cats since they like its texture, smell, and the noises that their teeth make on it.

However, you’ll want to make sure that the box has no sharp edges. See, some cats get a bit too excited when playing around, and they might accidentally injure themselves on the box’s edges.

Sure, the majority of delivery boxes aren’t too sharp. Still, some heavy-duty boxes may be unsafe for your cat to play with.

Also, make sure that your cat isn’t chewing on inked areas. Furthermore, some boxes are treated with chemicals to make them sturdier or water-resistant. It’s important that you keep those out of your cat’s reach.

What Are Some Cardboard Alternatives That My Cat Can Chew Safely?

There’s a wide variety of safe chew toys that your cat could munch on without you worrying about health risks. Here’s a list of our favorites. 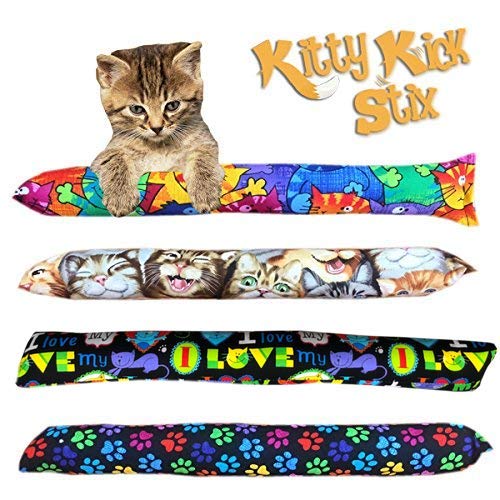 Kitty Kick Stix 15" Original Catnip Kicker Toy (Set of 2), Made in USA (Mystery)
The ORIGINAL Catnip Kicker Toy founded in 2012.; 100% Handmade and shipped in the USA. Choose fabric or select Mystery for a random choice.
$22.95 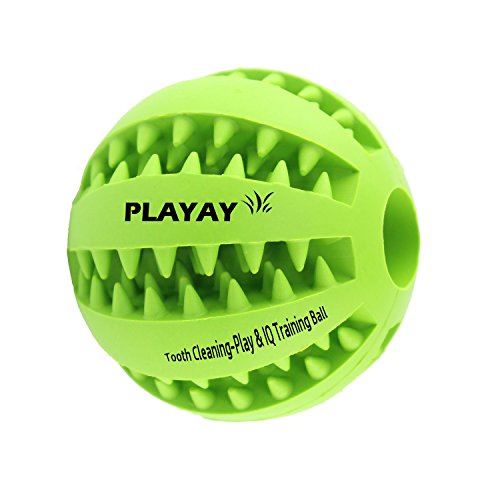 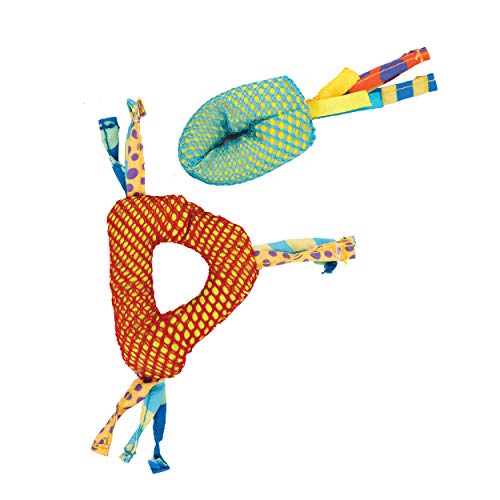 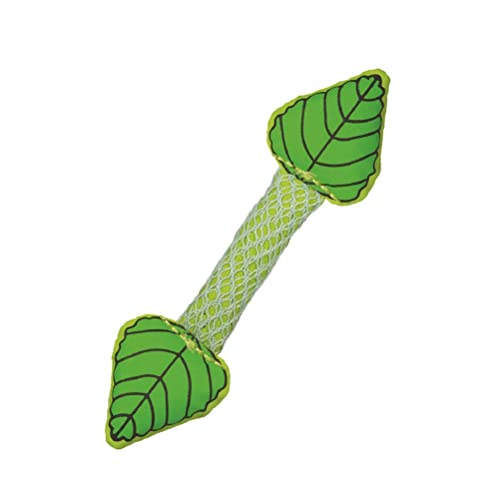 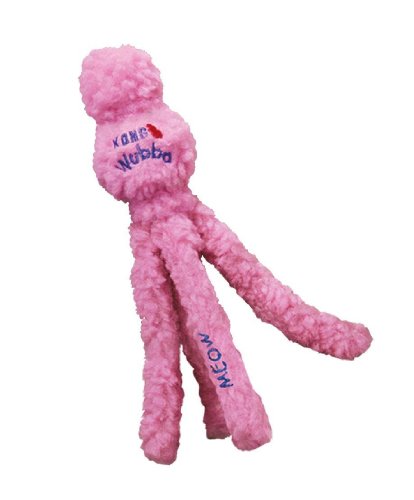 While cats do strange things sometimes, we can’t help but fall in love with their adorable eyes and fluffy paws every time we look at them. Still, these little creatures might lead us to ask ourselves weird questions.

Why does my cat eat cardboard?

Well, your cat might just be trying to have fun with a cardboard box. Plus, he could be bored, slightly anxious, or hungry for more nutrients than the ones present inside his diet.

Other possibilities include teething, having certain health conditions, or, though rarely, suffering from pica. Don’t hesitate to contact your veterinarian if you suspect that it’s a health-related issue.

Why Do Cats Poop on the Floor?

How to Cope With the Loss of a Cat

Why Do Cats Eat Their Own Fur?

My Cat Died…What Do I Do With the Body?

Is Cheese Bad for Cats?

How to Treat Cat Acne: Everything You Need to Know