A pet is often considered a member of the family, which is why their well-being is a top priority to their owners. Some pets, like cats, are restricted from ingesting certain herbs.

Even some of the seemingly harmless herbs can have detrimental effects on the health of a pet. So, some cat owners might find themselves asking: "can cats eat mint?"

Because mint contains essential oils, it can impact your cat negatively. Catnip and catmint are safe species for your cat to eat, but other species (garden mint) can lead to gastrointestinal upset if large quantities are eaten.

In this article, we will discuss whether mint is a herb that is considered safe for your purring friend. Let's dive right in!

Cat Attitudes is reader-supported. When you buy through links on our site, we may earn an affiliate commission.

Is Mint Safe for Cats?

Mint leaves are mainly composed of essential oils. The high essential oil content means that mint can have detrimental effects on a cat when consumed in large amounts. 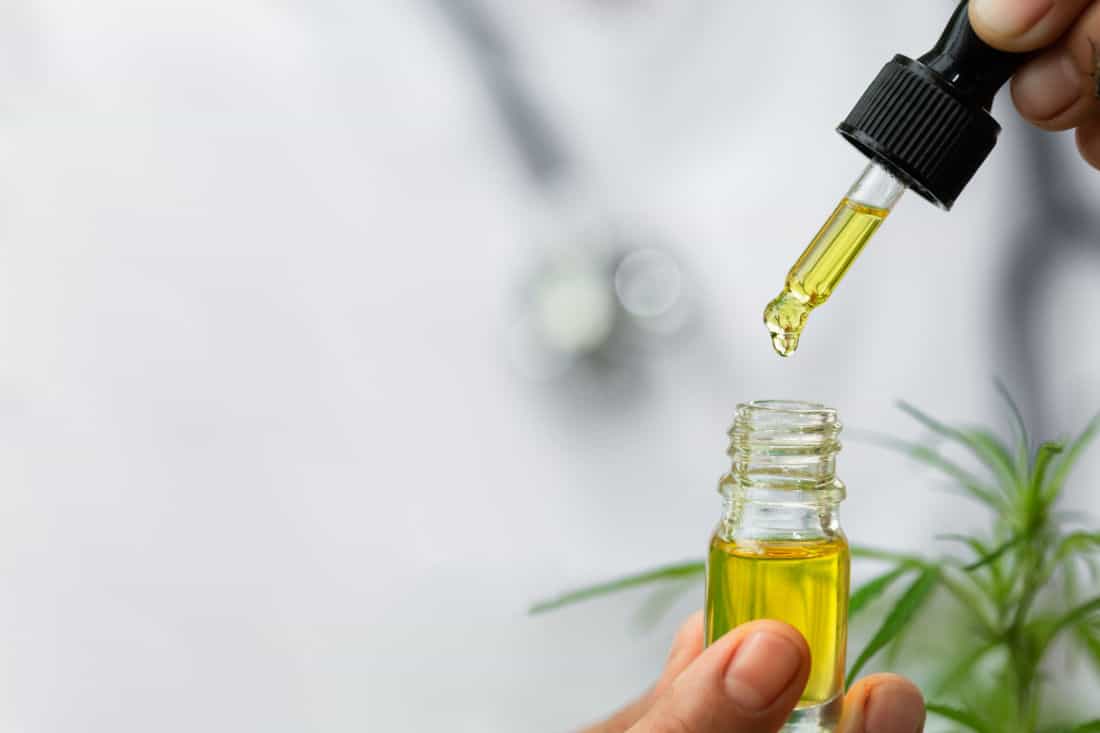 There are many subspecies of mint. All of these species are in the Lamiaceae plant family. Some species like catnip and catmint are safe for cats to consume. However, other species like garden mint can lead to gastrointestinal upset if large quantities are eaten.

Garden mint is the most common species in the Lamiaceae family. The essential oils that are unique to this species also cause the esophageal valve to relax. In turn, this makes the cat more prone to vomiting.

However, the effects of garden mint on cats are considered mild compared to that of pennyroyal mints. The pennyroyal can even lead to liver failure. If a cat has pre-existing liver, intestine, or bowel disease, they have a higher risk of developing complications if they ingest mint.

Symptoms of Mint Poisoning in Cats

Some mint species rarely cause illness. However, if you think that a cat may be suffering from mint poisoning, there are some signs to look out for. Usually, mint poisoning is limited to gastrointestinal symptoms, including:

Figuring Out if Your Cat Has Mint Poisoning

If a cat has any of the symptoms mentioned above, it's vital that you take it to see a veterinarian. If you saw the cat eat plants before the onset of symptoms, be sure to inform the vet to help them reach an accurate diagnosis.

In order to diagnose a cat, a full physical will be performed to check for any abnormalities. Additionally, blood samples may need to be collected and tested to assess the cat's overall condition. 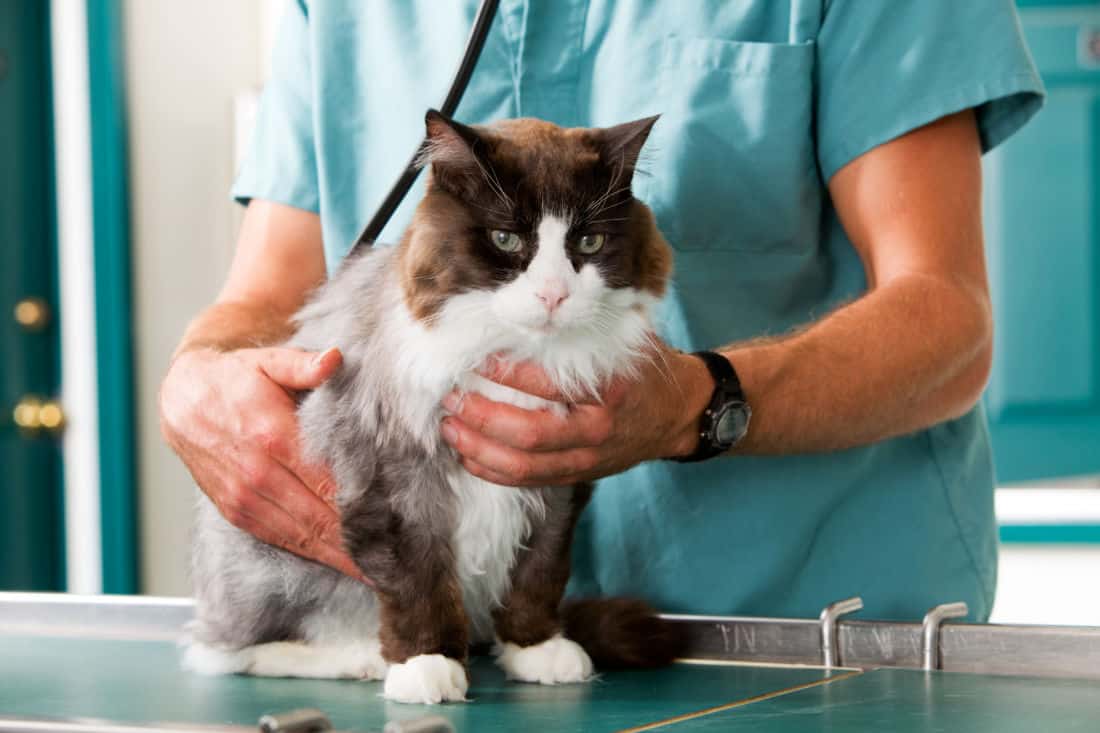 The blood test is usually a complete blood count and a biochemical profile. These tests measure the level of cells and minerals in the blood.

Results that are not within the normal range, may be indicative of liver disease or failure. However, these tests alone are often not enough to determine the severity or cause of the decrease in liver function.

No, most cases don't require treatment. However, if the cat already has pre-existing conditions or a severe reaction to the mint, then treatment may be required. These treatments include:

The aim of this procedure is to remove the mint (or any other plant) from the cat's stomach before it's fully digested. This can be done by using hydrogen peroxide to induce vomiting or using gastric lavage (in more extreme cases).

Vomiting and diarrhea can lead to dehydration. Therefore, in some cases, intravenous fluids are administered to stabilize the cat. For these fluids to be administered the cat will need to be hospitalized.

Will The Cat Fully Recover From Mint Poisoning?

Most cats will make a full recovery from mint poisoning. Although, in cases that have resulted in liver damage, ongoing health issues may result.

Since mint plants are so common, one step you can take to ensure your cat's safety is to become familiar with the types of mint that grow naturally in your area. 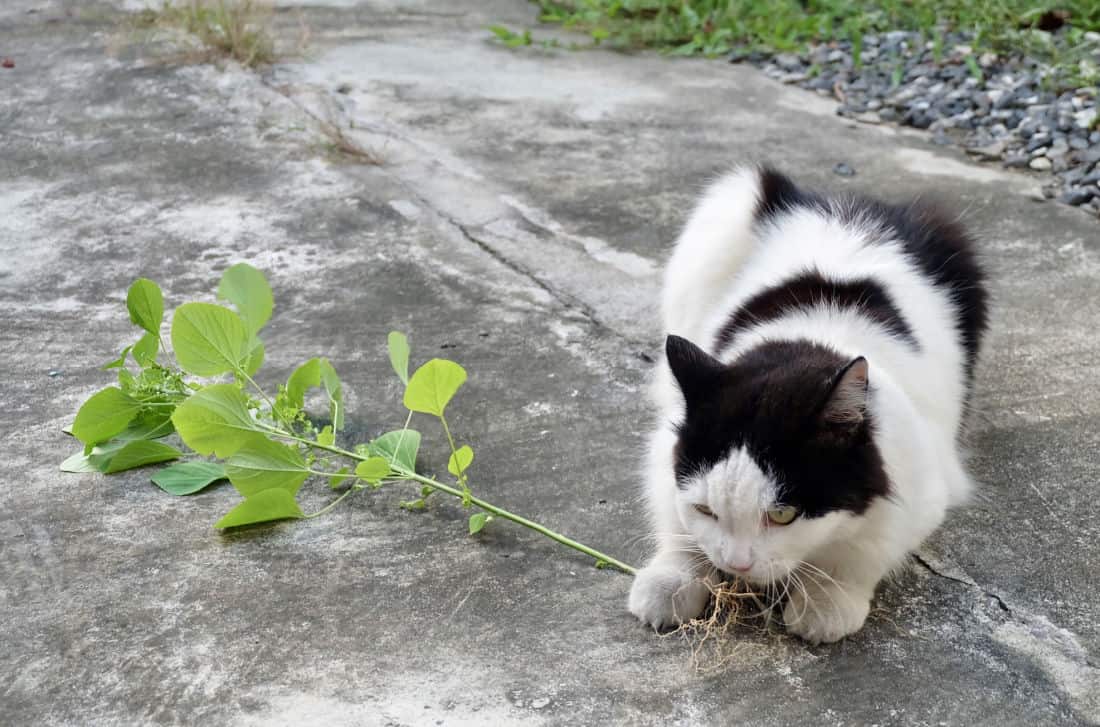 Another simple step you can take is to keep any potted mint plants in areas unreachable to your feline friend.

The Exceptions: Catnip and Catmint

While most mint species are toxic to cats, there are two exceptions; catmint and catnip.

Catmint and catnip may seem like different names for the same thing. However, they're very different plants. Both plants are mints that belong to the Nepeta genus. Catnip is Nepeta cataria. On the other hand, catmint Nepeta mussinii.

So how can you tell the difference between them? Catnip has a weedy appearance while catmint is often found in the form of white perennial flower beds. Cats will roll around in the catmint flower beds but are unlikely to eat catmint.

Catnip is more commonly used in comparison to catmint. It’s often given as a fun treat to cats.

Like most things, catnip is only harmless in moderation. Thankfully, cats are usually capable of self-regulation. This means that they won't overindulge if you leave a bag of catnip laying around.

It’s important to regulate your cat's catnip intake because it can lead to stomach upset. Furthermore, if you give your cat too much catnip it may lose its effect.

What Effect Does Catnip Have on Cats?

Catnip's effect on cats is due to the essential oil nepetalactone. This oil binds to receptors on the cat's nose and stimulates the nerve leading to the cat's brain.

The exact mechanism of this essential oil is unknown, but it's believed to mimic feline pheromones. This leads to a euphoric high that lasts between ten to thirty minutes.

Do All Cats React to Catnip the Same Way?

Sometimes the cat gets very excited and playful for a few minutes before wandering off for a nap. Other times this species of mint makes the cat meow, purr, roll around, and drool. It's also considered a mild hallucinogen. 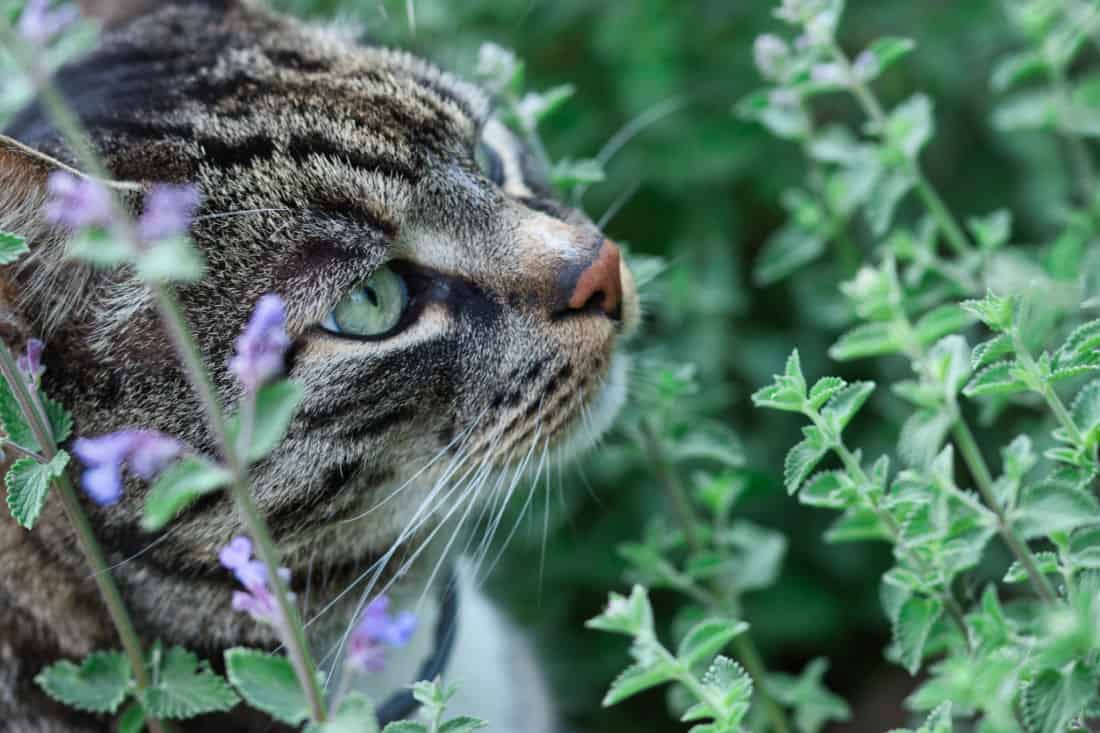 In some cases, catnip can induce mild aggression in cats resulting in a few growls or swats. Therefore, if there are multiple cats in the house, it would be sensible to give catnip to one cat at a time. This reduces the risk of a fight between them.

Why Are Some Cats Unaffected By Catnip?

After the effect of the catnip has worn off, the cat can't be affected by a further dose for a few hours.

Some cats are completely unaffected by catnip. Evidence suggests that this is an inherited sensitivity that occurs in one-third of cats. Additionally, cats under three months old don't usually respond to catnip.

It's important to note that you should keep an eye on your cat after giving it catnip. Despite the fact it's not directly harmful, the cat might get hurt playing while it's in the euphoric state that catnip induces.

Since cats will continue to respond to catnip regardless of how many times they've been exposed to it, it can be a very effective training tool.

For example, some owners buy scratching posts to prevent their cats from clawing at the furniture. However, sometimes the cats refuse to use the post. To overcome this challenge, you can sprinkle some catnip on the post to make it more appealing to your cat.

Additionally, if catnip naturally has a calming effect on your cat, it can be used to soothe your cat during heat.

Owners can also keep their cats entertained by buying catnip toys. There are many toys available on the market. However, you can also make some DIY catnip toys. 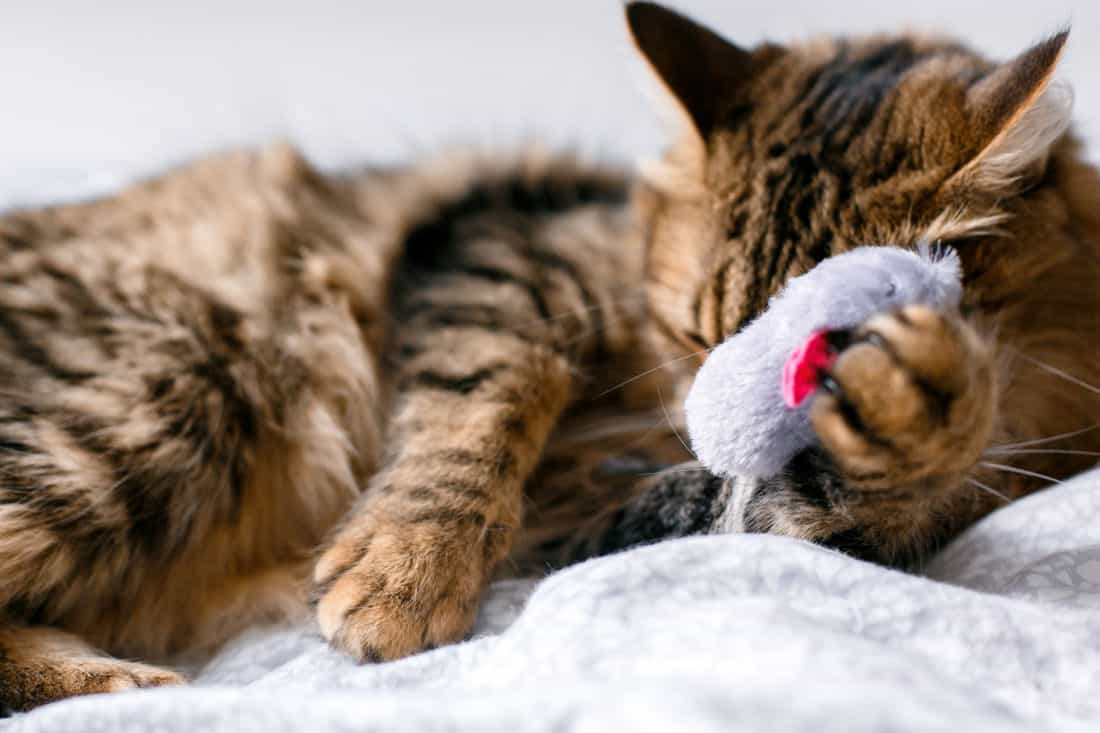 Why It's Important to Keep an Eye on Your Cat While on Catnip?

For instance, you can use an old piece of fabric (like a sock). You can just sprinkle some catnip on it. If you’re a skilled sewer, you can even make little toys or pouches with catnip inside.

Where Can You Get Catnip?

You can buy catnip in many forms. It can be found as dried balls, in toys, and as a spray. Catnip is also extremely easy to grow.

If you're planning on planting your own catnip, you can start from starch and purchase it in seed form.

This will require you to properly prepare the seeds because catnip seeds have a tough exterior. Therefore, they must be stratified or before they can sprout.

Preparing your seed can be done using the following steps:

If stratifying your seeds seems like too much effort or if you think using seeds will take too long, you can also purchase the plant as a seedling.

It should be noted that the best time to plant catnip is during the early spring season. These plants are also quite large and require a lot of sunlight and sandy soil.

Most mint species aren’t safe for cat consumption. Luckily, most cases do not require treatment. In a few cases, treatments like emptying the cat's stomach or intravenous fluid administration may be required.

Therefore, cat owners should be well aware of the different harmful mint species and the warning signs of mint poisoning. If you have mint plants in your garden or home, they should be kept out of your cat's reach.

However, species like catmint or catnip can have positive applications. Catnip can have either a soothing or stimulating effect on cats.

Catnip is often used to train cats and soothe them during heat. It can be used to encourage cats to use their scratching post.

You can either purchase catnip or grow it yourself. Growing catnip using seeds requires stratification. However, you can also purchase catnip as a seedling plant that is ready to be repotted.

Why Do Cats Poop on the Floor?

How to Cope With the Loss of a Cat

Why Do Cats Eat Their Own Fur?

My Cat Died…What Do I Do With the Body?

Is Cheese Bad for Cats?

How to Treat Cat Acne: Everything You Need to Know